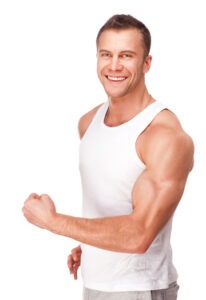 Tendons are fibrous tissue bands that connect muscles to bones. When the tendon becomes irritated, inflamed or suffers tiny tears, the condition is known as tendonitis. Board certified orthopedic surgeons Dr. Steven Thomas and Dr. Gregory Bigler provider treatments for tendonitis to patients in Las Vegas, Nevada, and surrounding locations.

The cause of tendonitis is usually hard to determine. But the condition typically occurs for one of the two reasons:

For unknown reasons, tendonitis is also common in diabetics, and in recent years, the use of certain antibiotics has been related to the occurrence of tendonitis. The condition occurs most commonly in the elbow, shoulder, knee, heel and wrist, although it may happen in any area of the body.

Rotator cuff tendonitis is the most common form of tendonitis in the shoulder. It involves the tendon of the muscle that attaches the upper part of the humerus at the shoulder joint. In most cases, this tendon is injured due to overuse, typically in a sport or an occupation that requires the arm to be repeatedly elevated.

Two forms of elbow tendonitis that commonly occur as overuse injuries among athletes include:

This causes pain on the external part of the elbow joint. Nearly half of all adult athletes who play racquet sports are likely to be affected by this condition. It may also caused by any other activity that flexes and twists the wrist repeatedly.

This causes pain on the inner side of the elbow. Despite its name, this type of injury is less common than tennis elbow. It typically occurs to individuals in occupations that involve repeated elbow movements, such as construction work. Sportspersons are less commonly affected by golfer’s elbow.

Tendonitis in the wrist commonly occurs in the form of de Quervain’s disease. This is a condition that causes pain in the back of the wrist at the thumb’s base. Although this disease typically occurs in people who engage in repetitive pinching or grasping motion with the thumb, it may sometimes occur during pregnancy for unknown reasons.

This condition affects the Achilles tendon, which is the large tendon attached to the heel bone at the back of the foot. The condition usually results from overuse, particularly in sports that involve running or repeated jumping. It accounts for nearly 15 percent of all running injuries.

Poorly fitting shoes or faulty running technique may also sometimes cause Achilles tendonitis. Board certified orthopedic surgeons Dr. Thomas and Dr. Bigler receive patients for tendonitis from Las Vegas, Nevada, and other nearby cities and neighborhoods.

If you would like to schedule an appointment or learn more about the Knee and Shoulder Institute procedures & treatments performed by Las Vegas, Nevada board certified surgeons Steven C. Thomas, MD and Gregory T. Bigler, MD. call (702) 933-9393; Physical Therapy (702) 933-9394