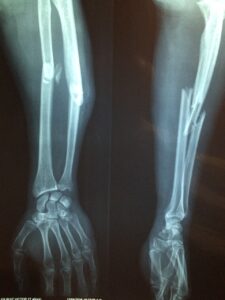 Both malunion and nonunion type of fractures are complex conditions which are very different from the original fracture. Having such fractures evaluated by an expert surgeon is important to identify the cause so that it can be treated to restore limb function.

How is Malunion Different From Nonunion?

Malunion refers to a fracture that has healed, but not in the usual position. The healed bone takes up unusual positions which causes the affected limb to get twisted or bent or grow shorter.

In a nonunion, the bone does not heal at all, so realigning does not occur even a year after the fracture. This inability to heal may be due to the body having insufficient bone tissue to repair the break. It may also occur due to other factors such as the patient being a smoker or having diabetes.

Both malunion and nonunion fractures result in similar symptoms of pain, discomfort, bruising, swelling, and impaired function in the affected area. An expert orthopedic surgeon can diagnose the exact condition and treat it using non-surgical or surgical procedures.

Causes of Malunion and Nonunion Fractures

Infection that lingers around the broken bone is one of the causes for a malunion or nonunion, and it can be very challenging to treat. Reconstruction of the bone can start only after completely eliminating the infection.

Insufficient blood supply to the fracture area can lead to dead bone. During the surgery in such cases, the dead bone has to be removed to bring the living bone ends together.

Lack of stability in the affected area may also prevent fracture healing.

The patient’s biology and levels of important substances such as vitamin D, thyroid hormones, and minerals such as phosphorus, calcium and magnesium can also influence the healing process.

Treatment of Malunion and Nonunion Fracture

In some malunion fractures, if the limb function is not reduced, the doctor may advise some non-surgical treatment. In cases where the position of the broken bone is causing further damage, they will advise surgical treatment to remove the aberration. The most common form of surgery for malunion is called an osteotomy and it includes a lengthening, or shortening or realignment of the broken bones.

Nonunion fractures may be treated using braces or electric stimulation while others may require surgery. Surgery for a nonunion fracture involves a repair of the damaged bones and the tissues around them. Gaps in between bones may be filled with a plate and screw system to give stability to the bone. Sometimes, bone grafts are used to stimulate the bones to heal.